Statement on the article published in the “Kölner Stadt-Anzeiger” on September 3, 2020 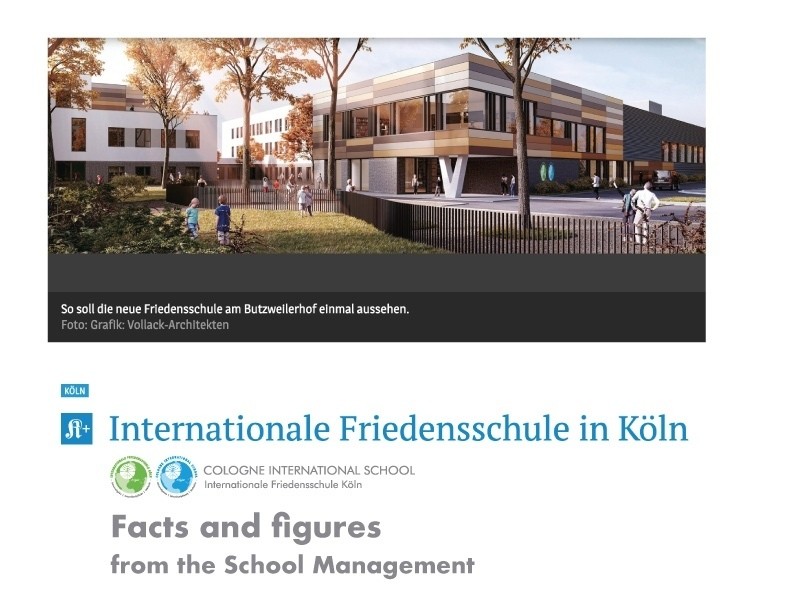 In today’s edition of the Kölner Stadt-Anzeiger, an article about our school was published which, despite the author holding different factual information, contains misinformation.

In June the author asked the school a number of questions that the school has answered in detail. After that the author was no longer available for further discussions, queries or classifications.

For your information, we are correcting the following untrue statements of the article. The italicized text parts are quotes from the article:

The other two (schools) – a bilingual grammar school and a primary school – are so-called state-recognized “substitute schools” (Ersatzschulen). These are generously funded from tax revenues. Last year, according to the Cologne district government, this was 2.07 million Euros for the two substitute schools. The amount of the “refinancing” depends only on the number of students in the two substitute schools. There are only a few guidelines – and obviously no controls, what happens to the money, as the state authority admits at the request of the “Kölner Stadt-Anzeiger”.

The author has the information that the school funding is not based on “few guidelines” and without controls, but according to the comprehensive and strict rules of the “Regulation on the Financing of Substitute Schools” (FESchVO) of the state of North Rhine-Westphalia, which is also publicly available. According to this, the state pays 87% of the costs that it would spend for a student in a public school as reimbursement and against concrete receipts or invoices to a private school authority. With every student who opts for a substitute school instead of a public school, the taxpayer therefore even saves money.

The question of cross-subsidizing the private supplementary school (Ergänzungsschule) arises not only because the children of all three schools go to the same building and participate together in afternoon extra curricular activities as well as individual subjects such as sport and Spanish. Dealing with the sensitive issue of school fees is also questionable: In contrast to private supplementary schools, state-recognized substitute schools are not allowed to take school fees. Funded private schools must not create any financial hurdles that exclude children from less wealthy families.

Since the funding is insufficient to fully finance the operations of the substitute schools, there can be no cross-subsidization. In addition, for the substitute schools, the funding only relates to the lessons given according to the NRW curriculum in the classrooms provided for this purpose and the class sizes defined for public schools. Additional learning offers, smaller study groups and afternoon offers are generally not subject to refinancing. Exception: The afternoon activities (“Offener Ganztag”) of the primary school, which is only used by the primary school as a substitute school. Joint physical education classes (Spanish classes following the NRW curriculum are not conducted across schools) are part of the school concept, which was approved by the district government in 2007. Here, too, only those pupils who are registered at the substitute school are refinanced. The missing funds are not financed through school fees, as the school operator does not charge any fees for schooling.

Parents who register their child join the sponsorship association (Förderverein) and are contractually obliged – in addition to an admission fee of 3500 Euros – to an annual fee of 16,080 Euros for this school year.

It has been explained several times, and also correctly quoted in the text, that membership in the sponsorship association is a decision of the people who become members. These can, but do not have to exclusively be parents. The sponsoring association is open to everyone who wants to support the statutory purpose of the association. In many cases, it is parents who see that the school’s comprehensive educational offer cannot be realized without further financial support. However, it is also the members of the association who define the statutes and the subscription scale. These have also been sent to the author and are also publicly available.

Critics see a hidden school fee for an offer that is financed with taxpayers’ money, which could then also be used to cross-subsidize a private elite school.

There is no factual basis for the observation of the “critics” who are not specifically named. The mere repetition of a claim does not increase its substance.

Several parents, who do not want to be named, contradict this vehemently: “… We were not only presented with the school contract, but also the contract of the sponsorship association, which had to be signed at the same time … ”

Parents, who have perceived the registration situation in the described way, are welcome to contact the management of the school operator or the board of the sponsorship association so that the misunderstanding can be clarified.

All parents would also be informed about the increased annual fees.

This statement only applies to parents who are also members of the sponsorship association. The sentence should be: “Members are informed about the increase in annual fees in accordance with the subscription scale.”

From our point of view, there is no inopportune time. All information about the school and the legally independent sponsorship association is publicly available and can be accessed at any time.

The city had sold the property to the private school operator.

The information is wrong. Neither the city itself owns the property, but the urban development company “Moderne Stadt”, nor has the school operator ever acquired the property itself.

The city’s building supervisory authority, however, assumes that the permit will be issued this year.

We can confirm this. All city departments involved have given their approval and the building permit is currently being prepared by the building inspectorate.

23jan9:00 am1:00 pmOPEN HOUSEExperience individualized, hands-on teaching and learning from primary to IB Diploma or Abitur9:00 am - 1:00 pm

Experience individualized, hands-on teaching and learning from primary to IB Diploma or Abitur

Please complete this form with detailed background information and your interest in our school. We will then follow up shortly to arrange an appointment, a student trial day and/or further information.